At this year’s global summit of the Open Government Partnership artificial intelligence will be one of the hot topics. Participants look for governments to open up to be able to hold leaders and people in power to account, especially about how money is managed and spent. At the same time, unease over the effects of the digitization of data is growing. This post is also part of the Fiscal Futures blog series exploring some of the biggest issues that fiscal accountability enthusiasts are likely to encounter over the next 10 to 15 years.

My answer to the question asked in the title of this post – do artificial intelligence and big data present opportunities or challenges to fiscal accountability – is both. Depending on the time of day, the weather, the news, etc., I find myself oscillating somewhere between two extremes:

Participants in the Fiscal Futures project imagined four scenarios of what public finance would look like in the year 2040. The fun of the exercise wasn’t in extrapolating extremes, but in deciding what could have tipped us in that direction and what the warning signals were. This post presents some of the key challenges and opportunities we saw and discussed in terms of artificial intelligence, big data, and digitization in general – and what we should be doing about them.

An immediate red flag for our fiscal future was the massive and sustained collective failure of the imagination in setting a vision that would govern the stewardship and use of data. This point has been made repeatedly by Martin Tisné from Luminate, who argues that we are stuck in a counterproductive silo of thinking about ownership.

Instead, we should be thinking about a framework of rights, and thinking more about whose rights we are safeguarding (or violating) in the way we manage data. Although Martin’s ideas speak most obviously to topics like privacy, they have implications for any data that could be in the public interest and data that satisfies the impulse to “be in control” of one’s life. In public procurement, for example, myths of commercial confidentiality and a transparency ‘gap’ in contracted-out government services constrain access to critical information that is in the public interest, like fire defects in a public-private hospital. The public may not own the data, but they should probably have a right to it.

Public information needs to be embedded in a new data and information architecture that is not about who owns it, but who is entrusted with it by the public, and what accountability measures are in place to protect its appropriate use.

One key element of our fiscal future, especially with the rise of artificial intelligence (AI) and machine learning, is how we design an architecture of transparency that will enable and support the outcomes we want to encourage in society. And, equally important, the culture changes it could lead to.

At the Open Contracting Partnership, we work on transforming public contracts – a US $9.5 trillion market that is vital to delivering critical goods and services. We aren’t just after transparency for its own sake: we want public contracting systems that are 10 times better – 10 times more efficient, fair, responsive, and accountable – than before.

Transparency is currently seen by many as a compliance-based chore. Governments shuffle paperwork to satisfy legal mandates and I am constantly surprised about how little procurement data is used to measure or improve frontline services. Data that improve public accountability should be routinely used and consumed by the government to manage transactions and improve internal efficiency. Designing for government data use is a key channel for creating feedback loops that improve data quality for all users. This is what Americans call ‘eating your own dogfood’. As data volumes increase, analysis should prove ever more useful for internal purposes (with machines to help process).

When the UK’s second biggest contractor Carillion imploded, there was a scramble up and down the country to assess exposure. However, only 33 out of an estimated 450 of Carillion’s contracts were in the UK’s official contracts portal. Because the portal was regarded as a dumb pipe for the public to use, there was little attempt to improve its data quality or usefulness. However, had these efforts been made, perhaps alarm bells would have been raised much earlier.

Applications like the UK’s contracting portal should be designed for government use and then leveraged through open data to feed other use cases. These portals should become platforms, clearly shaped around tangible performance goals. This is where open data and taking an open-by-design approach can add so much value: one of the reasons for the success of Ukraine’s procurement revolution was that Ukrainian civil society organizations helped design business intelligence, red flag tools, and a complaints mechanism in the government’s Prozorro procurement system. The architecture was designed to plug into each user’s specific role, including meeting the government’s transactional and auditing needs. The system also enabled a wider ecosystem of users, including citizens: half of the issues flagged by citizens currently get fixed. The data are granular, specific, and support targeted policy interventions.

AI may promise a quick fix to deep insights into data, but IBM’s Watson will not provide the right answers if there are no clues as to the problem or if driven by the wrong assumptions, and if there is no culture of asking questions to begin with. 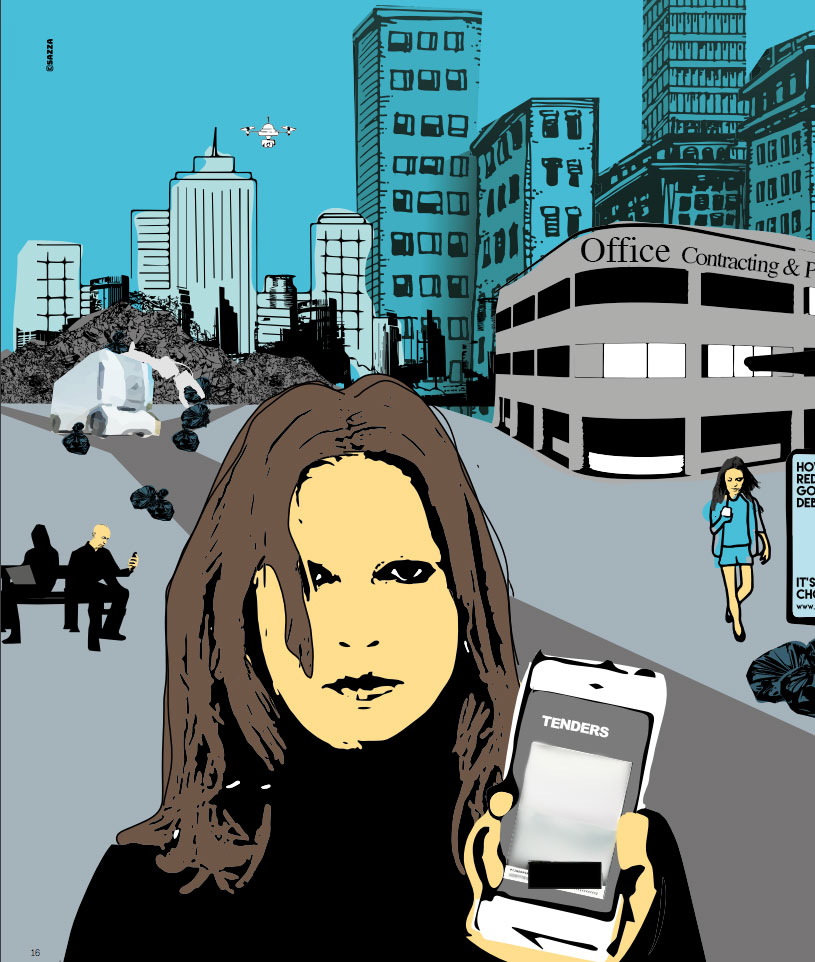 Challenge 3: Moving from paper to data to digital services

It’s not about technology, but what we want the technology to do. Procurement is a great example, as it connects many of the government’s fiscal tasks: from the budget to the contract, to the spending, to the registration of all parties. Why does a vendor have to fill out personal and business information multiple times if it already exists in a parallel database? Why can’t citizens follow a procurement process from the problem it wants solved — often initiating in lofty campaign promises — to the solution and service contracted?

Warren Smith, Director of the UK’s Digital Marketplace, has been thinking hard about how to support this shift. As he said at the International Open Data Conference 2018 in Buenos Aires, “User-centered design should be the norm. This requires first understanding what the problems are that you’re trying to solve, for whom, and who needs to be engaged. Fundamentally, open contracting is about how procurement data can help solve people’s felt needs.”

Designing for use also involves deconstructing the black box of political will and thinking much harder about the incentives of different actors to engage with transparency and accountability interventions. As Mushtaq Khan from SOAS — who is running a huge new anti-corruption evidence program — put it: if you can’t say who will do what with your intervention (and why it is in their interest), you don’t have an anti-corruption strategy.

So, our positive fiscal future sees a change in culture toward openness, engagement, and results. This change process will involve sustained, repeated interaction. Think of open contracting, budgets, extractives, etc. as a long (and winding) journey rather than a single destination. Over time, the more that users are engaged in designing these processes, and the more that government responds to that engagement, the deeper insight and reform will go. It will take political leadership and changed incentives to embed data, monitoring, and feedback into our fiscal future and to shift the equilibrium of interests so ordinary people and businesses win. But, when they do, they will have a stake in defending the progress.

Impact-focused transparency and accountability interventions will involve engaging new allies, such as public information regulators who are mandated by governments to steward data and information in a big data age. And there will be new challenges, such as the bias coded into artificial intelligence and machine learning applications.

Thinking this way about fiscal governance will identify use cases for AI as opposed to just thinking about how AI will change fiscal governance. Are we enabling a shift from interacting with government that is slow, confusing, and frustrating to one that is fast, simple, and [relatively] empathetic? It’s not about the interface, but the interaction. It’s not about the process itself, but its beneficiaries. It’s not about mining big data for problems, but identifying what data is needed to generate solutions.

We are still a long way from asking the right questions for AI and machine learning to make the best use of the data that is becoming available. It means thinking through the problems first and involving the right people in that process. How can we improve the quality of the meals we provide as a city in schools and prisons and support local business, for instance? How can we provide more affordable health care for citizens?

Of course, the pace of change as the machines take over will be a challenge for many fiscal governance experts. To borrow (brazenly) from Matt Levine, one can imagine a conversation at The Open Contracting Partnership (OCP) in 2022 that goes something like this:

OCP Director: Awesome. We have a new machine learning algorithm that can evaluate all our OCDS user interventions to maximize our impact.
Frontline advocate: Great, that will be very useful to me.
OCP Director: You mean you will be very useful to it.
Advocate: What?
OCP Director: It’s your boss now.
Megatron 3000: Greetings.
Advocate: What?
OCP Director: Don’t worry, it’s my boss now too.
Megatron 3000: Thank you. Please have one million use case mappings, technical architecture reports, and user-centred design consultation plans for me to evaluate on my desk by close of business today…

Fortunately, before Megatron, we still have some time and a lot of work to do to get us on the right path. Now get to work Humans!