How governments spend:
Opening up the value of global public procurement

Public contracting is the world’s largest marketplace. One in every three dollars spent by government is on a contract with a company. But how big is it really?

A report from the Open Contracting Partnership and Spend Network estimates that globally governments spend $13 trillion a year on public contracts for goods, services and works.

But less than 3% ($363 billion) is published openly. Opaque contracts that miss information shut out businesses, journalists and civil society from analyzing and interrogating the data.

Including basic details, such as the value, and start and end dates of agreements, would provide data users with a better understanding of when pertinent contracts are due to expire. It would also improve effective oversight to reduce fraud and corruption.

Now more than ever, taxpayers should know their money is being well spent as governments set off along the long and rocky road to economic recovery.

Read the full report analyzing the global value of public procurement and check how much your country spends. 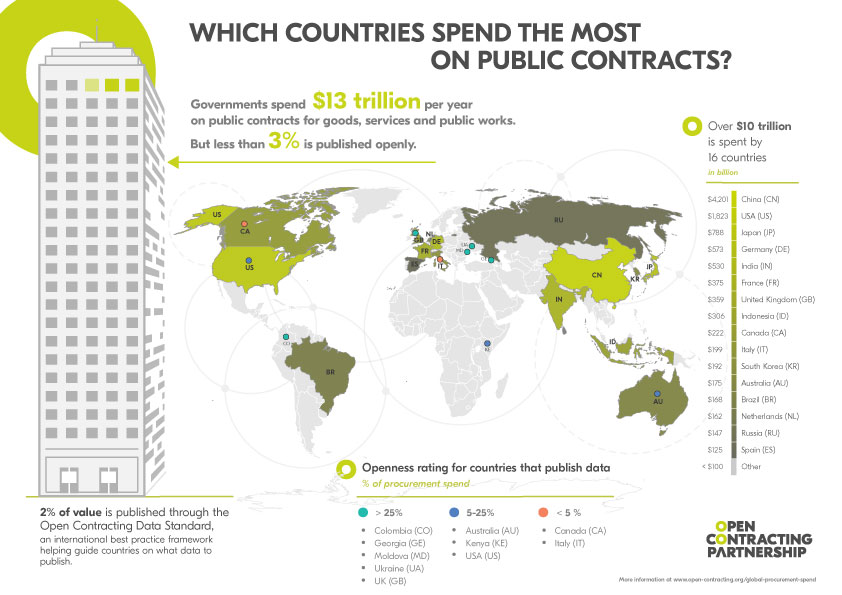 Check out the infographic

Get our newsletter gathering stories on the use and abuse of government contracts during the COVID-19 pandemic and beyond.

$12.6 trillion of public procurement spend each year is opaque

How governments spend: Opening up the value of global public procurement