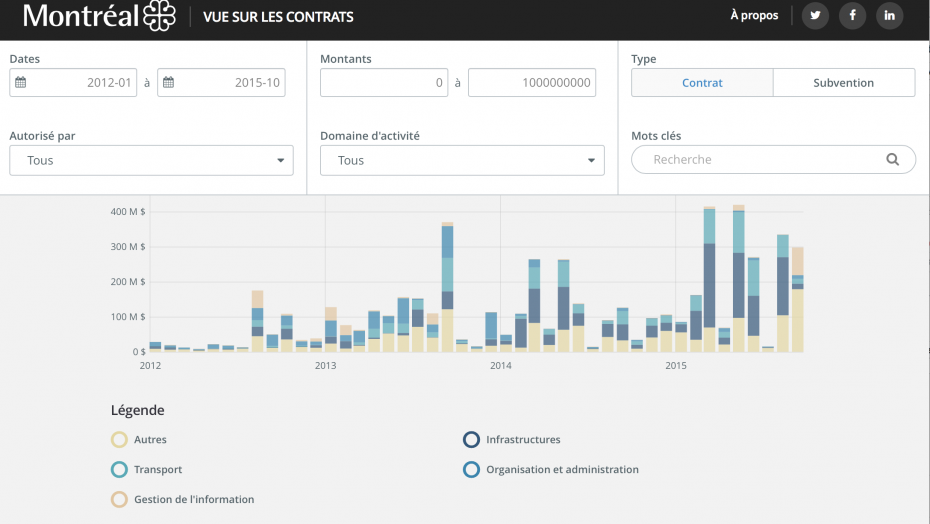 In 2015, Montreal took two significant steps towards greater transparency: it opened up a large portion of its contractual data and launched Vue sur les contrats, a visualization tool that allows users to dive deep into this information. This initiative demonstrated the the benefits of standardizing data, but it also highlighted the challenges associated with data quality and design choices that are inherent to such projects. Using a standard format and open source software allowed us to create a model, which other organizations can adopt, to transform data that is publicly available, but difficult to access, into a vehicle for more transparency and better informed citizens.

One of the very first projects launched by Montreal’s Smart and Digital City Bureau was the development of a visualization tool for municipal contracts. Following a consultation process with the city’s open data community, we decided to make the data available in open contracting format, to ensure the tool would adhere to international best practices and support open data standardization efforts. We chose to apply a dogfooding strategy for the architecture’s development, testing the tool using our own data. The visualization tool uses only data structured in open contracting format. An API was also developed to enable dynamic interaction.

The visualization tool, therefore, does not have access to privileged data. Everything that was needed to develop the tool had to be contained within the open data. We first published the data in CSV format, since the financial systems offered limited formats. The Vue sur les contrats tool crawls CSV files on the data website on a daily basis, and structures it according to the open contracting format. The web interface queries the public API and displays the results. We developed Vue sur les contrats with an open source license to encourage others to use the tool and its code. It is also hosted on a public code management platform.

As is often the case with such technological projects, the technology itself was not the main challenge. The first challenge we faced was to determine which type of user we’d cater to. On the one hand, we could have chosen to emphasize analysis and visualization tools that treated the data as a whole. On the other, we could have focused on research and how specific contracts were presented. We chose the latter once trials on the first scenario proved difficult for users less familiar with complex visualizations. While contract data are not  considered big, they are complex. The numerous facets of possible analysis and imaginable applications made it difficult to create a simple tool that would meet all potential user needs. We chose a solution that prioritizes the primary uses we identified. The public API will make it possible to develop tools to meet other needs, such as visualizing the contracts.

The second challenge: data and procurement process knowledge. Government procurement processes are, in reality, much more complex than a simple contract. In the case of Montreal, procurements can have significantly different contract lifecycles (and data lifecycles) depending on whether a contract is subject to the request for proposal process – meaning it must be approved by a political body (municipal council or executive council) – and the smaller, but numerous, purchase orders issued by civil servants. To put these two types of contracts in the same category  doesn’t fully reflect the reality of the process, and doesn’t allow users to completely understand the workings of the city. This isn’t to say that the factual data is any less accurate, but at the end of the day, a tool like Vue sur les contrats is not only designed to improve transparency, it must also allow users to better understand certain administrative operations.

In the face of such challenges, members of the community conducted an evaluation of the tool post-launch, to identify possible improvements. A dozen of the recommended changes will be applied to help make Vue sur les contrats more useful. Some of these changes depend on  ongoing improvements in data production.

The tool is not yet perfect, but it has met its key objective to significantly improve contract transparency. Journalists, elected officials, political staff and citizens use Vue sur les contrats and we are asked about the tool regularly. Occasionally, it’s mentioned as a source in media reports about city contracts.

In other words, open data is fundamental to transparency, but making transparency accessible to all requires a practical tool like Vue sur les contrats.

From JSON to visualization: Analysis and process guidance for OCDS data

Greater transparency in calls for tenders could save Europe billions