The recent and ongoing discovery of oil, gas, and vast mineral deposits in many parts of Africa offers the potential for huge revenue sources for many countries most in need of revenue. In Cameroon for example, a recent Revenue Watch International (RWI) report cites petroleum exploitation as an important source of income. Even more importantly, the booming mining sector is expected to play a central role in President Biya’s goal to establish his country as an emerging nation by 2035.

However, as the open contracting website describes, the award and implementation of contracts in the extractive industries (EI) sector is extremely important. “The contractual agreements between governments and oil, gas, or mining investors are the foundation for the sector’s development. They define not just the monetary gains… but also shape many social, economic and environmental aspects…”

With this wide-ranging impact in mind, GOXI, a space for dialogue and an online platform for innovation and collaboration serving those actively working on governance issues in the extractive industries, recently hosted its first photo competition to put a visual face on the problems faced in this sector. 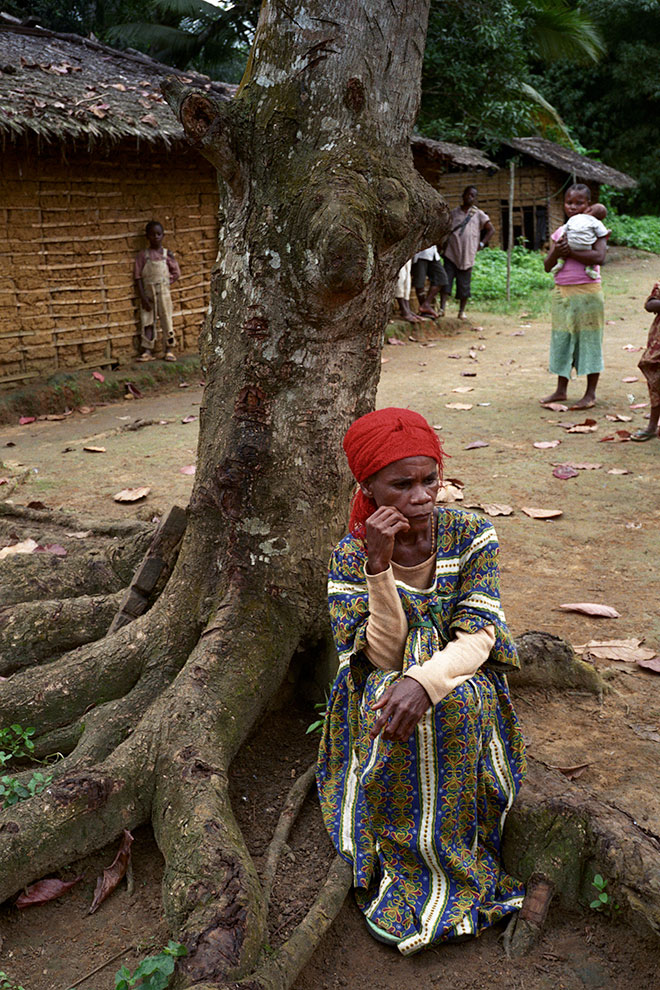 The winning photo, captioned “Waiting for Manna,” speaks in particular to the social impact of extractive industries concessions. It was submitted by Jaff Bamenjo of le Réseau de Lutte contre la Faim (RELUFA), a Cameroonian civil society network involved in monitoring of extractive industries as part of its effort to fight hunger and poverty.The photo is striking on its own – an elderly woman dressed in bright red, blue and yellow pops out of her brown surroundings, sitting by a tree and staring pensively into the forest in the distance as village life continues on around her. But infinitely more powerful is the narrative behind the image. Jaff’s photo captures the story of Jeanne Noua, a member of the indigenous pygmy Bagyeli community in southern Cameroon.

Often overshadowed by their more established and “savvy” Bantu neighbors, many Bagyeli continue to rely on traditional hunting and gathering for sustenance, in the forests surrounding their villages. These forests also contain medicinal trees and sacred sites. Beginning in 2000, however, the World Bank-supported Petroleum Development and Pipeline Project began construction on a 1070km-long oil pipeline linking the Doba oil fields in Chad with an oil facility off the coast of Cameroon – the largest private sector investment in Sub-Saharan Africa at the time.

The majority of the pipeline traverses Cameroon, with the final segment slicing through the forested areas inhabited by the Bagyeli. RELUFA has been monitoring the pipeline’s effect on the local population for some years.  Jaff explains in a recent interview that while indigenous populations in Cameroon (and elsewhere) are often marginalized, the pipeline project disproportionately impacts them  as the concessions given to oil companies includes the forest traditionally used by the Bagyeli. As such, they are no longer permitted access to their source of livelihood.

During a recent monitoring mission he met Jeanne, whom he describes as “a very energetic woman, very outspoken. In rare cases will you find a woman being a leader in such a community, but this is exactly what she is. She’s a leader in her community, being a woman. It’s really amazing.” Jaff was struck by this image of the impressive woman, which is particularly arresting as the normally enthusiastic Jeanne sits so anxiously, simply “sitting and waiting, not knowing what to do, not being able to go to the forest as freely as she used to.” Having lost her livelihood, which was intimately linked to this forest, she instead sat quietly by her house, “looking emptily into the sky… waiting for Manna.”

One of RELUFA’s network members, le Centre pour l’Environnment et le Développement (CED), filed a 2002 Request for Inspection with the World Bank on behalf of several indigenous populations along the Cameroonian portion of the pipeline route, including the Bagyeli. This request focused on several factors but overall claims that the project was adversely affecting the local communities and environment. This includes, in particular, the overall loss of Bagyeli forest land and lack of compensation.

Samuel Nguiffo, director of CED, notes that one of his biggest successes was pushing the government, World Bank, and oil companies to work together to take into account the rights of indigenous peoples – factors not included in the original project document for the Pipeline Project. He is working to ensure that the Bagyeli and other communities are properly compensated, and to set a precedent to have these populations considered in future EI concessions and contracts.

While safeguards do exist to protect such populations from the potentially negative effects of extraction, whether or not these have the intended effect varies. It takes the involvement of variety of open contracting actors – private sector, government, civil society – to realize the vast potential of oil, gas, and mining contracts, and to ensure citizens derive the benefits of these huge investments.