Last year, during the C20 summit, I had a chance to ask a panel of international open data and anticorruption experts about the transparency in state revenues. Their response can be summed up as, “Why? Is there something wrong with the revenues?” Well, at least in Ukraine there is.

Nowadays, there seems to be a global consensus that transparency in procurement contracts is a good thing. People want to know how the government is spending their taxes, who gets what and for how much. There is a long way for most countries to go before the disclosure is complete, but it would not be an exaggeration to say that at least we all agree on the need to have it.

That is not the case for state revenues. You see, the government does not just collect taxes, but it also sells lots of stuff – from small items like used computers to larger assets like property – while state-owned enterprises (SOEs) sell even more. Unearned revenues are as risky as inflated procurement prices.

So what should we do about it? Ukraine is a strange but very inspiring place to be right now. Since the Euromaidan revolution of 2014 the “windows of opportunity” have been flung wide open. That has allowed the country, in just two years, to develop and implement the most advanced and transparent e-procurement system in the world: ProZorro. From there, we moved on to develop ProZorro.Sale – the world’s first completely transparent state asset sales reform.

How the system works 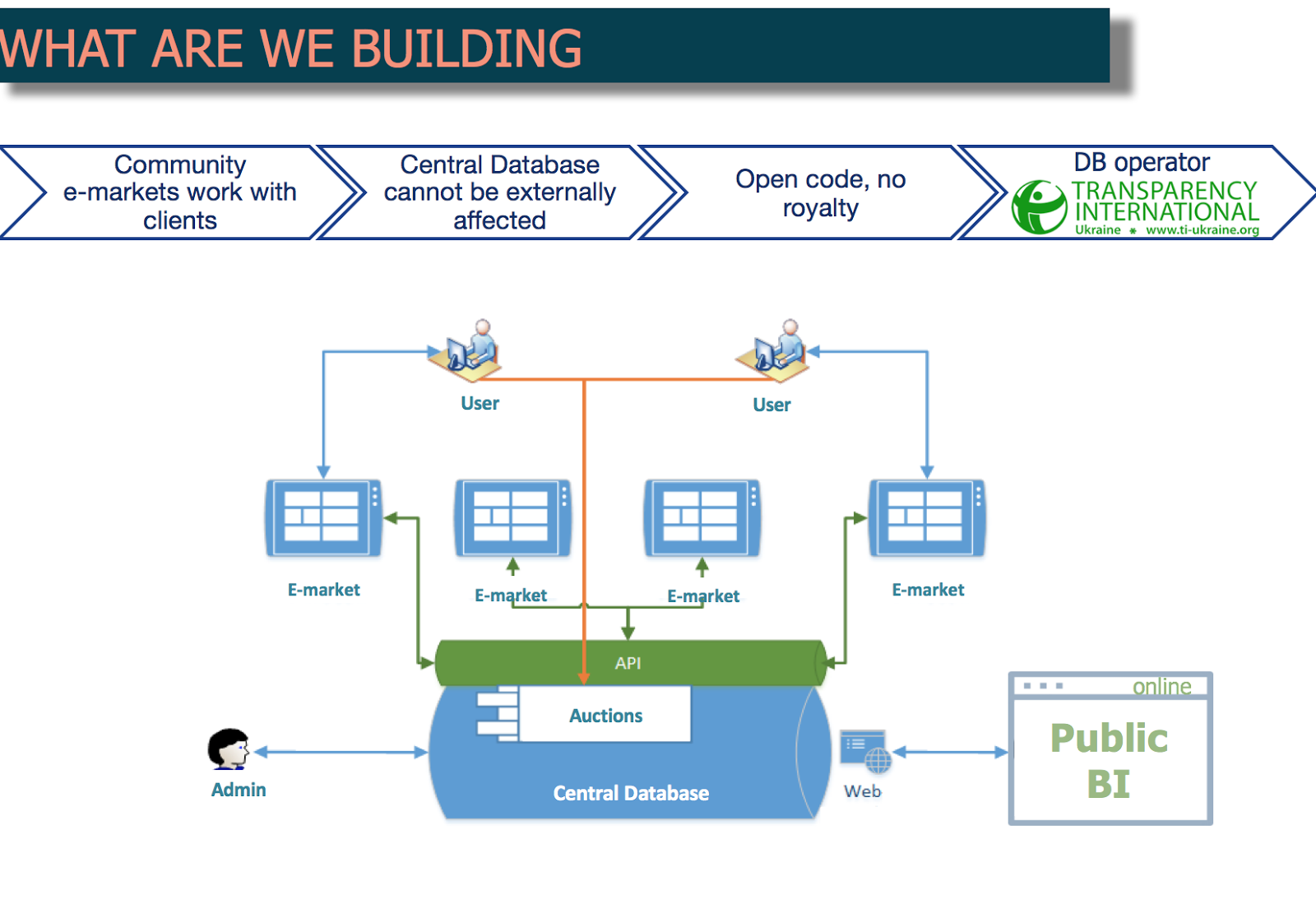 ProZorro.Sale is an e-auction system consisting of a central database administered by an NGO (it moves to a government agency in late 2017) and a multitude of commercial platforms connected to it through an API.

It functions like this: the government enters the description and the starting price of the assets for sale or lease into the central database using any one of the commercial platforms’ websites. Consumers can see the lots on all the websites and place initial bids via them.

The commercial platforms compete with each other for clients (the bidders who want to purchase used goods that the government sells). The platforms are funded by commissions from each successful transaction.

The central database also houses the auction module, meaning that all the bidders from different platforms compete in one place. The auction itself is a hybrid second price auction. It lasts three rounds. In each round a bidder gets one chance to increase their bid and can see the bids placed before theirs. Whoever bids the lowest in a round has to move first in the next.

All the asset and auction data is available to everyone, except for the number and value of the initial bids and the the participants’ names. Once the auction has ended this information also becomes public. So all the data on successful and unsuccessful auctions, like participants’ names, registration documents, and bids, is open to the public. There’s a public API (accessed via the public portal www.prozorro.sale) and a public business intelligence (BI) module (https://bi.prozorro.sale) developed by the company RBC Group based on Qlik solution software. 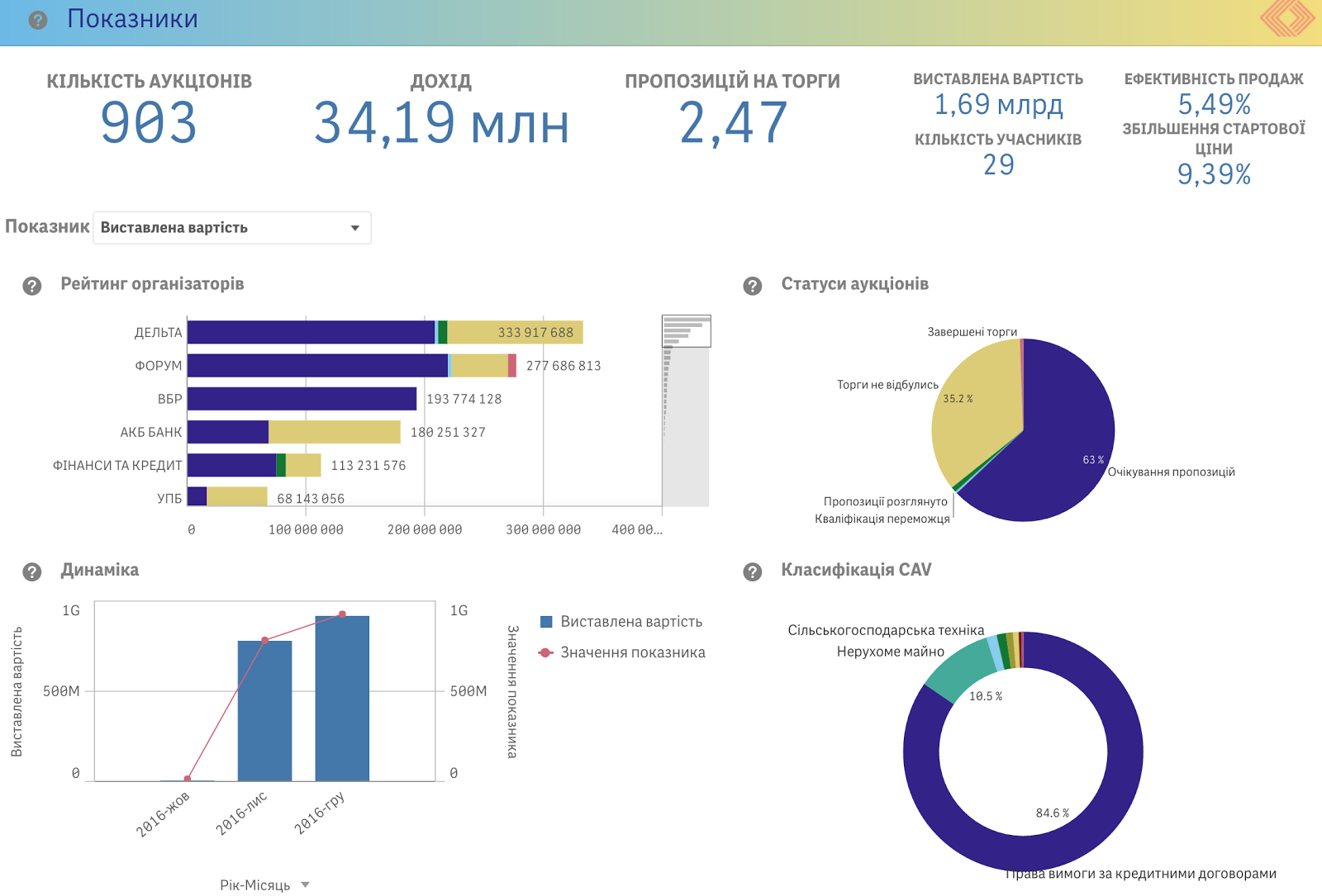 The central database’s technical schema is compliant with the Open Contracting Data Standard (OCDS). OpenProcurement’s Data Standard (developed on the basis of Open Contracting 1.0RC) was extended to fit ProZorro.Sale project requirements. Although some new field names have been added, since transparent asset sales are rather new.

This distributed architecture has a lot of advantages. It: 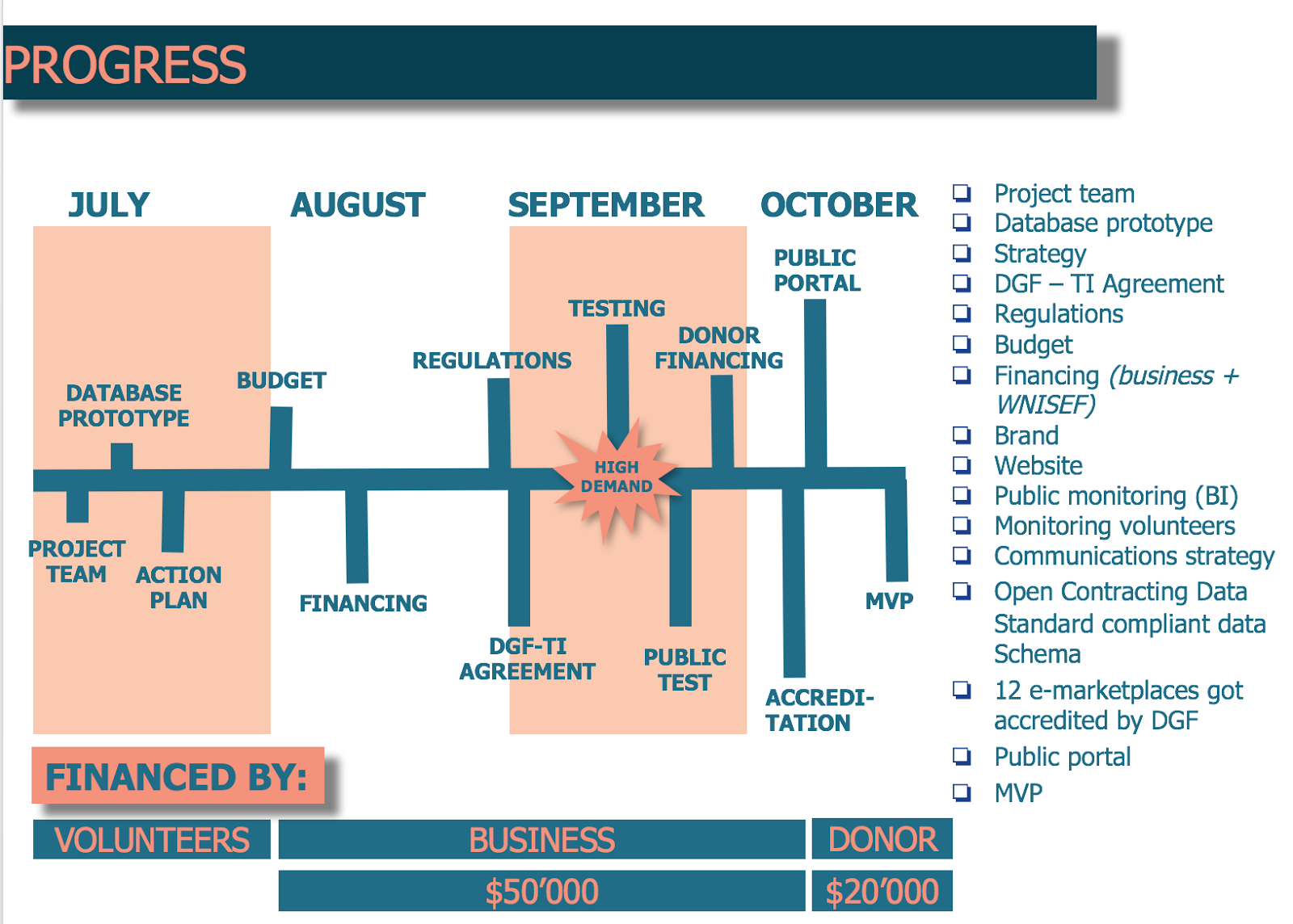 The project began in July. We’re piloting the system on the assets of the Deposit Guarantee Fund – the government agency that insures part of people’s deposits and runs bankrupt banks. Today, in December, it has around US$4 billion in assets for sale.

The system went online in October with 12 platforms connected to the database. Some of the assets for sale now include a van, an office building and even a US$7.5 million loan of Ukrainian Railway – the biggest railway in Europe. Here’s the link to the first lot.

So it took us just four months to develop a fully tested e-auction system. Our secret is that we used the original ProZorro procurement code, which is fully open source (github). We modified the auction logic and some procedures and turned that into a new system. It also means that ProZorro.Sale is fully open source as well (github, documentation is available in English and Ukrainian). And the total cost of this four-month project is under US$100,000. ProZorro is cheap, quick and effective, so there’s no good reason stopping other countries from using a similar system if they want to (either in public procurement or sales).

The project is set to expand to other areas in late December. We already have a high demand from other government agencies and SOEs eager to sell or lease their assets transparently.

So what do you think? Is this a good idea? Would you be interested in a completely transparent asset sales system for your country?