Recent studies and surveys clearly indicate that the current Ukrainian procurement system is very ineffective, prone to corruption and kickbacks. As a result, the government, in strong collaboration with the private sector and civil society, is conducting a major procurement system reform.

According to international experience, the introduction of e-procurement system may save at least 10% of the procurement budget due to higher efficiency and transparency. In 2014, around 250 billion Hryvnias (more than $10 billion) were spent in Ukraine for procurement of goods, services and works for public needs, almost half of which (more than $5 billion) was above the national threshold and the rest below the threshold. Therefore, every day without reform costs Ukraine roughly 2.7 million dollars (10B*10%/365 days). This makes obvious that the system needs changes and that reform is necessary.

But there is a very important issue – who will initiate and coordinate the reform? Even in countries with highly centralized government, only the decision to reform the public procurement system is not enough to ensure a broad and unconditional support to reform. It is necessary to identify and authorize the champion of the reform – the person or the body with the sufficient political credibility and resources to initiate and coordinate the reform.

There are a lot of government institutions that deal with public procurement reform issues in Ukraine, but there was very little, if any, coordination between them. A clear and shared vision on objectives and desired results of the reform were also missing. In many countries where e-procurement reform was initiated, it met strong resistance from corrupt interest groups threatened by open and transparent e-procurement system when the established illegal schemes were becoming useless. At the initial stage, some bureaucrats and procurement specialists also opposed the reform, as e-procurement was believed to pose a threat to their jobs. It is extremely difficult to overcome such resistance without a clearly articulated political will to reform and without a champion of the reforms. Additionally, there was no political will and consequently no champion in Ukraine by the time when the civil society eProcurement initiative, later called ProZorro, emerged in July 2014.

ProZorro is a Public Private Partnership consisting of representatives from numerous non-governmental organizations, also private businesses and governmental institutions, united around the shared principles and aims. The number of instructional and individual members of ProZorro is now well over 100.

ProZorro began with the idea of several civil activists and procurement experts, who were inspired by the spirit of Maidan, believing that reform could be achieved from the bottom-up. These ideas transformed into the Concept of development and implementation of e-procurement system in Ukraine 2014-2015, which later got support of the vast majority of Ukrainian stakeholders, expressed in several MoUs in support of ProZorro. The next steps were the elaboration of the ToR through crowdsourcing, the development of the Open Procurement open source software using crowdfunding and the launch of the pilot of the new procurement system in February 2015, which has used the Open Contracting Data Standard (OCDS) as a key tool for data modeling.

The main principles of ProZorro are very clear and precise:

­Absolute transparency: any document and any information related to public procurement (annual plans, tender notices, tender documentation, bids, decisions of evaluation committees, contracts and their implementation, payments etc) have to be open and freely accessible online. The main slogan and motto of the new Ukrainian procurement system is very simple: Everyone Eyes Everything; literally meaning that any document related to public procurement shall be open and available online. Additionally, the information is available in open data and OCDS formats, enabling their analysis and processing.

All tenders – only electronic:

Documents from state institutions (extract from company registry, tax lien certificate, certificate on insolvency proceedings, etc.) are required at the end of the procedures and only from the winning bidder. This is the principle of self-declaration;

Use of e-signature is not mandatory for suppliers’ registration or for the bid submission;

Reverse auction is part of the tender, but the bidders are free to decide whether participate or not;

Winners are identified using pass/fail criteria. Sequential evaluation of the lowest bid is required. This means that bidders are not evaluated all at once, but the rather one by one, starting with the lowest bidder. If the bid complies with the technical and qualification requirements, it is deems to be the winner;

Any registered user can appeal any active tender, using the electronic appeal module. Appeal shall be considered in reasonably short period of time. Standstill period for contract awarding is used.

­Simplified and easy to follow procedures – Participation in paper-based tenders is associated with rather complicated procedures, as well as wasted time and material resources, making many companies reluctant to participate in sharing tenders. It is necessary to simplify the procedures and remove the administrative barriers. The system should be based on simple and easy to understand and follow procurement logic. 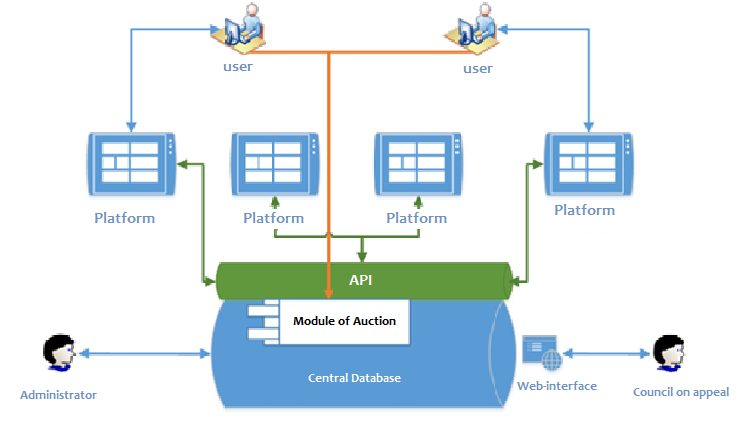 Multiplatform architecture of the system with cross accessibility feature ensures stability, competition and less dependence on political factors. Consequently quality of service provided by ProZorro will be subject to constant improvement.

Since February 2015, more than 80 procuring entities joined ProZorro and are now conducting their under-threshold procurement through the system. The number of electronic procedures already amounts to 580 with the starting price of 565 Million Hryvnias. Average savings is 12% and the number of signed contracts is 120.  The results produced by ProZorro were highly appreciated by the National Council of the Reforms, which is the highest-level entity in Ukraine for the reforms coordination. Support to the development of ProZorro and its nationwide rollout was named one of the priority reforms and it was included in the Ukraine Strategy 2020. It is expected that by January 2016 all procuring entities will join ProZorro and the tenders below the EU thresholds (representing approximately 90% of all procurements) will be completed through ProZorro.