«When they ask me where I live, now I can give them an address,” says a woman in her 20s who speaks into the camera while two workers erect street signs. “Instead of Villa 31, underneath the highway, I can say Pasaje Iquique.» A few seconds later, a second woman appears and tells a similar story: «Before, when I sent my resume, I could only write Villa 31. Now I can put my street and house number.»

These two citizens live in Villa 31, a notorious settlement in downtown Buenos Aires, located near the Retiro train station and between two of the wealthiest parts of the city. It covers an area of around 72 hectares (or 140 football fields) and is home to 40,000 people. Despite its central position, for a long time its streets did not appear on Google Maps and ambulances and firefighters rarely entered the informal settlements. Many areas were without sewers, storm drains, or drinking water.

But things are changing: Villa 31 has seen almost 33 billion Argentine pesos (about US$291million) in investments from 2016 until today. The Buenos Aires Government has installed 17 kilometers of new infrastructure, created a water distribution network, built over 1,200 new homes, and made improvements to over 2,100 others. This is a story of how that spending has been monitored and improved by civic activists and residents and how that approach is now being scaled across the city.

Understanding the public investment into Villa 31

Since 2017, the city of Buenos Aires has been collecting and publishing information on the BAObras interactive platform, to open up more than 1,100 projects under an ambitious public works program covering some 51% of the total amount spent on the city’s infrastructure. This makes the site the first point of information for public works taking place in Villa 31.

The pandemic brought to light how infrastructure failures in the villas were affecting the quality of life and health of their inhabitants. So in 2021, the Civil Association for Equality and Justice (ACIJ) started examining the infrastructure budgets for Villa 31 to check if the public works carried out in the neighborhood actually delivered tangible benefits for the community.

Rosario Fassina, ACIJ’s Right to the City Program Coordinator, found that getting a full picture of the data was not easy. She had to track information across a host of different agencies and budgets. Through BAObras, she was able to identify 53 projects going back to 2017. These projects related to rehabilitating public spaces (32%) and building new homes (20%), with a total investment of over 16 billion Argentine pesos (approximately US$145 million). Approximately 22% of the works in the villas were carried out by cooperatives (6% of the funds) and 60% of the projects were public tenders. Through additional access to information requests, ACIJ also tracked down another 17 projects.

The data collected on these 70 projects was limited to project costs, making it difficult to measure if they achieved their intended outcomes or the intended impact on people’s lives. And, in the case of the work carried out by local cooperatives, the lack of contractor names made it hard to know if community residents had been employed on the projects, which was a legal requirement.

From informing to empowering local residents

Nonetheless, ACIJ was able to use this to convene a highly effective civic engagement program with local residents to fill in the missing pieces and to track project progress.

A key element of the strategy was to supplement existing information with insights from residents about their access to public services and the status and knowledge of the public works projects.

ACIJ and residents were able to use this information to leverage official forums such as the Participatory Management Council, a body meeting on a monthly basis to discuss the projects carried out in the neighborhood. The Council is made up of 25 members including neighborhood representatives, government officials, and civil society organizations. The information provided by ACIJ empowered the neighborhood representatives, giving them an opportunity to truly participate from an informed position. The evidence and data gathered helped to bolster their requests to public officials. Silvana Olivera, a local resident, certainly thinks so: «In urban redevelopment, participation is key… It’s important to listen to the people because they are the ones who live here.»

The results of the BAObras analysis are also informing the civil society-driven platform Caminos de la Villa, which provides an independent view on the urban redevelopment process in all of the city’s informal settlements and helps local residents to track the status of projects and report issues. 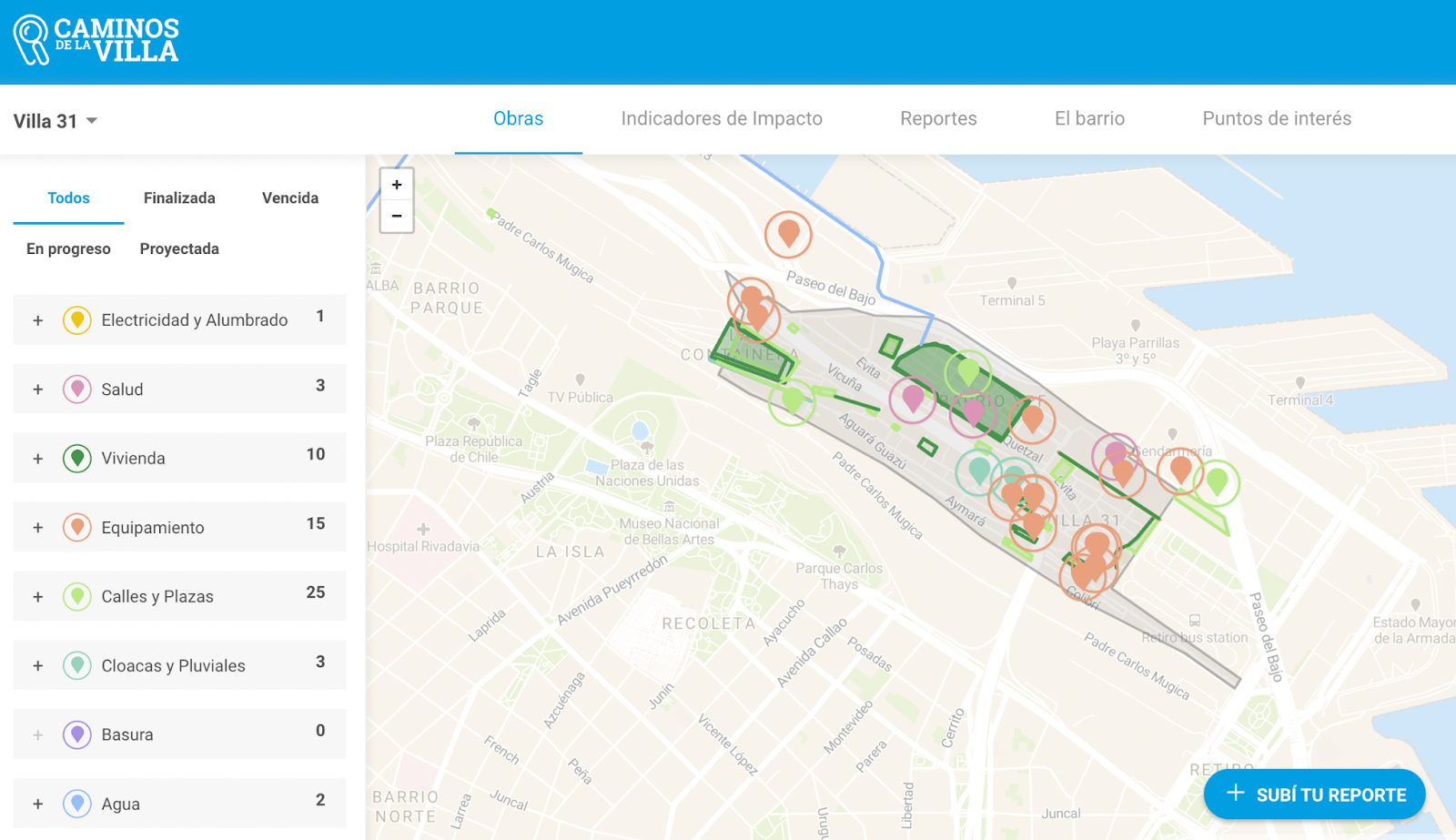 From diagnosis to action

ACIJ’s dialogue with BAObras and city officials took off and triggered changes in the management of the oversight of the urban development projects.

ACIJ is now working directly with BAObras to plug the information gaps on the platform, including the missing project ACIJ found and working to make the data more accessible so that projects can be monitored more easily, especially by area as opposed to budget line. ACIJ and BAObras are also exploring how to create more online discussion spaces to get feedback from residents.

The city government has also re-evaluated the need to generate better data to inform decisions, and to explicitly include the residents’ needs when planning and implementing public works. The Department for Special Projects responsible for the urbanization program in Villa 31 decided to create a new centralized unit to strengthen the monitoring and evaluation of the public works in Villa 31, to increase inclusion of residents in the planning of projects, and consolidate the information available. The new unit is now monitoring the progress of all the projects. Additional data is being collected and shared with residents to meet their needs as opposed to just ticking the box for financial supervision.

ACIJ is now expanding the civic monitoring partnership model from Villa 31 to the other three informal settlements, reaching more than 200,000 inhabitants in the city. The continued involvement of residents in decision-making processes will be vital in ensuring that the public works meet their actual needs – and that they can take on a meaningful role in how they work, live, and play in their neighborhoods. In the words of one Villa 31 resident explaining what the place means to him: «It’s a neighborhood we almost created by ourselves.» 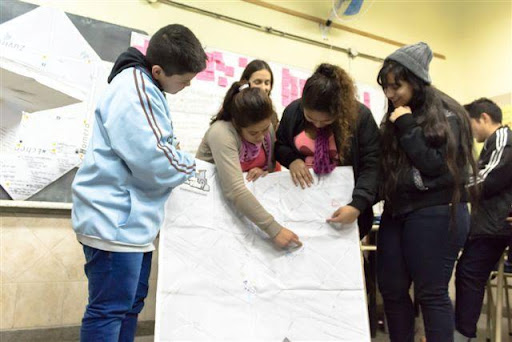 The official data provided by the government often shows only one side of the urban development plans.

Silvana Olivera, a local resident, recalls that she only learned about the works in Villa 31 when she joined the Mesas de Urbanización (Urban Redevelopment Roundtables) where local residents share information and discuss ongoing projects. At times, there was a huge gulf between the public sector perceptions of the works being carried out and the actual experience of those works by the local people. Villa residents often felt powerless, perceiving the urban redevelopment process as a tactic to drive them out of their homes. This is what happened in the past.

Rosario Fassina, ACIJ’s Right to the City Program Coordinator, believes that only by understanding how people experience decisions and plans that affect them, can we effectively develop impactful strategies to make public works more efficient, effective, and equitable.

To complement the official data, ACIJ designed a survey, co-creating the survey questions with Villa 31 residents to better understand their perceptions of the ongoing public works programs and projects. For example, the questionnaire asked whether they were connected to the formal electricity grid in their homes, whether they had a water connection, and whether or not they felt that they had sufficient visibility of public works projects in their neighborhood. The residents who helped to co-create the survey were tasked with interviewing their neighbors and sharing their findings in neighborhood meetings.

53% of respondents said they had not received information on urban redevelopment projects, 4% responded that they obtained information through official government portals, and a significant number said that they obtained information from their neighbors. As far as the projects are concerned, despite the significant investment, ACIJ figures show that over 80% of respondents still feel that their situation in relation to drinking water, electricity, and other services has not improved.