We’re big advocates for open source tools. When software is freely available without a commercial license, it makes it much easier for people working on similar issues to create solutions quickly and cheaply without reinventing the wheel.

To help our community of tool-builders to develop reusable open contracting tools, we launched a Bounty Program in 2018. We awarded five grants to four members of the open contracting community: Eduard Martín-Borregón from Mexico’s PODER, Mihai Postelnicu from DevelopmentGateway, Patrick Enaholo from Nigeria’s Pan-Atlantic University, and Rodrigo Parra from Paraguay’s Codium.

Fast forward one year, their tools that rely on the Open Contracting Data Standard (OCDS) are now documented and packaged and ready to be repurposed to tackle similar challenges in different contexts. For example, to show who owns the companies that win contracts, or aggregate public contracting data from multiple sources, to track payments to contractors, to assess the quality of open contracting data, or organize public contracting data without having to build a full e-procurement system. As we wrap up this first round of the Bounty Program, we’d like to share some highlights, including the products created, challenges faced and lessons for the future.

These were some of the most common observations mentioned by the grant recipients and organizers at the end of the program. Firstly, it was hugely beneficial for the community to have access to funds to push forward on their own with tools that OCP wasn’t necessarily working on.  The grant recipients said they appreciated the hands-off approach; they felt OCP trusted them to get on with the task and ask for support when needed. The program was also useful as a source of new ideas from our very diverse community, and the grant recipients appreciated the opportunity to contribute to the open contracting ecosystem. As one grantee put it: “The experience of working on something bigger than yourself and moving the ecosystem forward is very rewarding.”

That said, we would have liked the program to be more inclusive. In particular, we’ll be looking at how we can encourage more women to apply in the future, and feature projects with a greater focus on gender, and minority issues more broadly. Some projects didn’t manage to achieve as much as their creators had hoped within the timeframe, so we could work on setting more realistic targets next time and finding better ways to monitor progress regularly throughout the program. Finally, once the hard work of developing the prototype is over, we want to have a clear plan for taking it to the next stage (and determining what that next stage looks like, for example, connecting with other publishers who might benefit from the tool).

These lessons will help us as we prepare for the next iteration of the Bounty Program, which we’re expecting to launch in 2020. One of the key shifts in our new strategy is towards “diverse, tailored support for our community” and we believe running a community-focused program like this is an opportunity to build on the strengths of our partners and scale up the adoption of open contracting with more reusable tools and resources. Let us know what you’d like to see in the next Bounty Program or if you’re working on any exciting new tools (especially reusable ones!) that we should add to our tools directory.

Eduard Martín-Borregón, a researcher with the Mexican civil society watchdog PODER, and his team worked on two projects. The first, TowerBuilder, is a free tool that makes it easy to create websites and templates with data visualizations that combine open contracting and beneficial ownership data, all without requiring programming knowledge. Designed to follow the money in large contracting processes, the tool has been used to create platforms exploring large public works projects (TorreDeControl.org) and medicine procurement (VivirConVIH.org). During the Bounty Program, Eduard and his team upgraded various aspects of the tool, including full integration of the OCDS format.

The second project consolidates contracting data of multiple publishers in one place. Eduard’s team worked on an API client for the QuienEsQuien database, which aggregates data from several Mexican government sources covering more than 3 million contracts awarded over 18 years and worth almost MXN 30 trillion (US$1.5 trillion). PODER has used the data to scrutinize Mexico’s contracts, publishing their findings on a user-friendly interactive site, Todos Los Contratos (the site’s code is available on GitHub). During the Bounty Program, the team added new features to the tool, while creating tutorials and other guidance for others interested in using the data or developing similar platforms.

The API documentation is in Spanish and English, also they create varios OCDS extensions developed for OuienEsQuien.Wiki cases.

Mihai Postelnicu, a developer at Development Gateway, created a collection of open contracting data validation tools for reviewing the structure and quality of OCDS JSON data. Mihai adapted a validator from an existing open contracting tool to develop a version that would be much easier to deploy locally on a publisher’s own server and is compliant with all versions of the OCDS schema. He also identified some bugs in the code of the OCP’s validator, which helped us make some improvements.

Read more about the validator on GitHub. Access a working version of the app here and the Docker Hub here.

Nigerian academic and OCDS consultant, Patrick Enaholo, worked on an easy-to-use tool designed for publishers with limited tech capacity and infrastructure to produce OCDS data. For example, the tool, called OpenContractr, might be useful for a local government agency that wishes to adopt open contracting but doesn’t have the resources to run an entire electronic government procurement (e-GP) system. Publishers could install the WordPress plug-in as part of their website. It would ask them for different data (which they could enter manually or import a bulk file) and then organise it into OCDS format. The tool would also allows publishers to produce simple visualizations.

The code can be found on GitHub. Patrick can be contacted for more details and a demo. 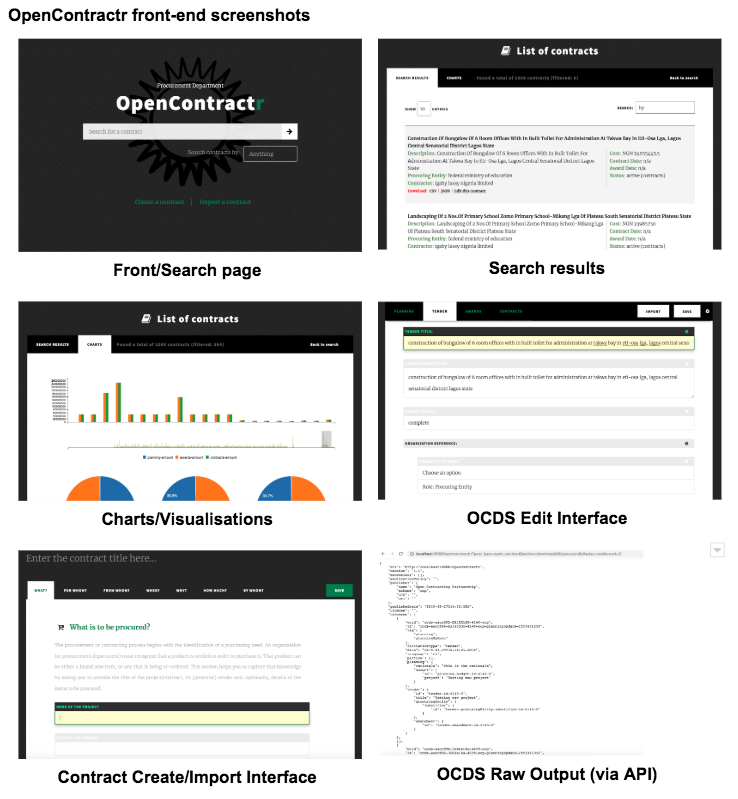 Rodrigo Parra, from the Paraguayan tech start-up Codium, worked on an updated version of the contract payment visualization tool, which was originally developed for the Ñamopora Ñanderape project, an interactive visualization platform to monitor the execution of a project by Paraguay’s ministry of public works. The update supports OCDS data, including source code in Github and an online version available for public use. Paraguay’s public procurement agency Dirección Nacional de Contrataciones Públicas (DNCP) has expressed an interest in supporting the tool further. 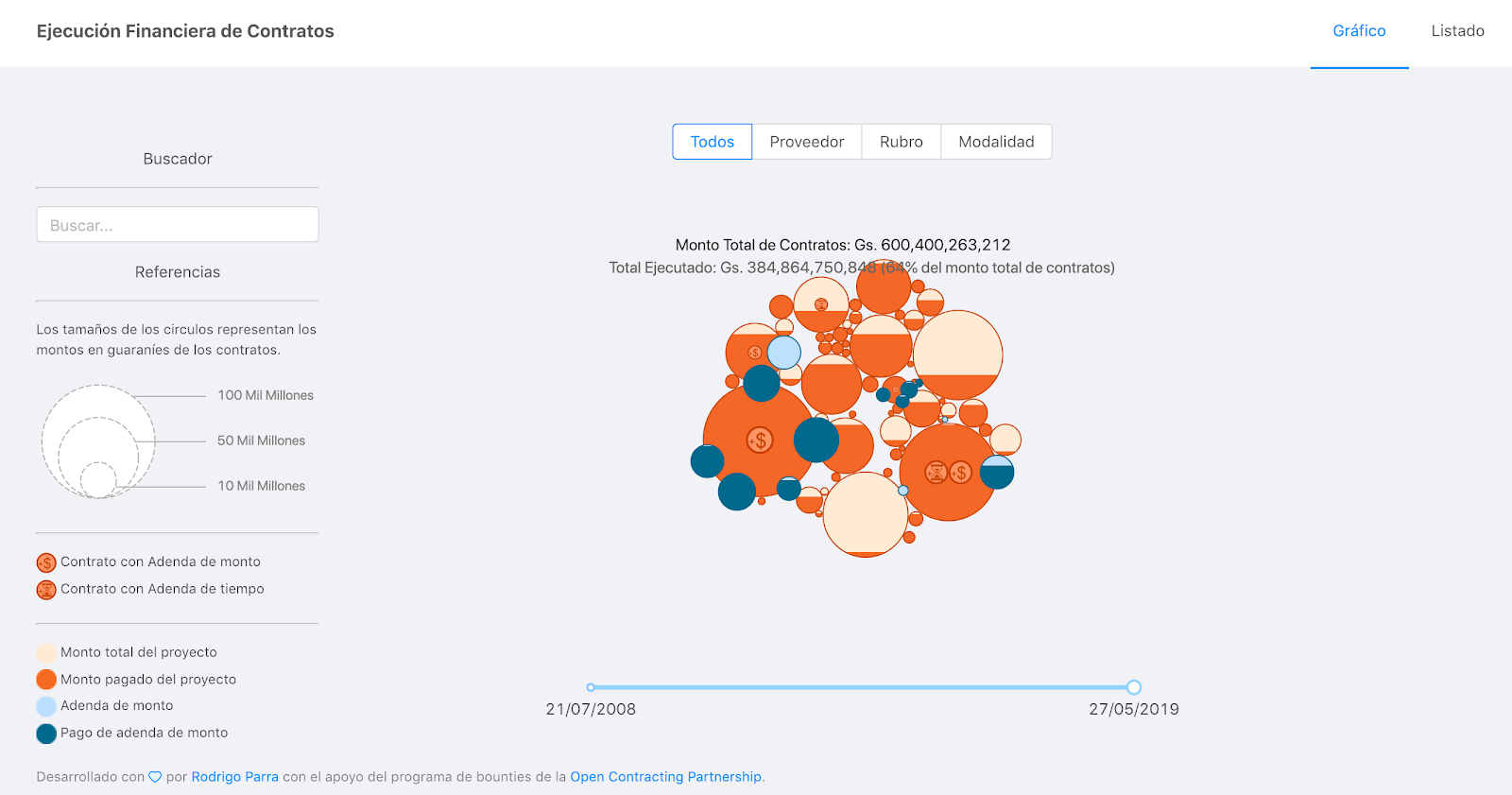