Researchers at CivicDataLab used procurement data, health data and geospatial data to review public health spending in Assam, India. They developed a method to verify if the money is reaching districts where mothers and babies need it most. Their initial findings suggest it isn’t, as fewer maternal and child health tenders are published for districts with high maternal and infant mortality rates, but more complete data would allow them to draw more accurate conclusions.

Analyzing public procurement data can reveal a lot about a government’s priorities and performance,  and which citizens benefit from public spending. When the data is published promptly and accurately, it can even be used to predict and re-assign resources to be distributed more effectively and equitably.

In India, researchers from CivicDataLab are using data on health infrastructure procurement to understand how investments in maternal and child health relate to health outcomes in the state of Assam. By overlaying data on health spending with actual health indicators, they developed a method for monitoring which initiatives by the state are working, which geographical areas need more assistance and the different kinds of assistance required.

Assam has one of the highest rates of infant and maternal mortality in India. Around 31 in 1000 babies die in the northeastern state before their first birthday and of the children who do survive, almost 35% of them show signs of malnutrition.

As most of Assam’s residents rely on the public health system (rather than private care), investments in health infrastructure can go a long way towards improving the well-being of the state’s women and children. CivicDataLab created a website dedicated to exploring Assam’s contracts, sourcing the tender data from the government’s central procurement portal. They prepared the data for analysis, structuring them in a user-friendly, machine-readable format called the Open Contracting Data Standard.

The data showed that 165 tenders for maternal and child health have been published over the last five years, with a total awarded value of over INR 360 million (US$4.7 million), or about 5% of all health related tenders published in the state. It’s worth noting that there may be other tenders unaccounted for, as the source data from the government portal represents only about 20% of the state’s contracts, according to World Bank figures (MAPS Assessment report for Assam, not published online).

The top contracting agency was the National Health Mission (NHM), which awarded 60% of maternal and child health tenders, followed by the Health and Family Welfare Department and Public Works Department.

The researchers also documented all the central and state-sponsored funding schemes related to advancing maternal and child health in Assam (see table below).

Table 1: List of schemes introduced in Assam toward bettering maternal and child health

There are more than 13 schemes at the central and state level, but procurement in this category was concentrated among the following schemes (see Figure 2 below):

Figure 2: This figure shows the yearly distribution of schemes under which tenders were published.

CivicDataLab used geospatial analysis to compare infant mortality rates (IMR) in the various districts of Assam with tenders related to maternal and child health in the same areas.

Infant mortality rates vary wildly across Assam, as Figure 3 shows. In districts like Cachar, Hailakandi, Dima Hasao, and Karimganj, almost twice as many infants die before their first birthday than in districts like Kamrup, Chirang, Baksa.

Figure 3: Map of Assam with infant mortality rates (Note: the IMR data used here are projected data for 2017 since district-wise information on this particular health indicator is not accessible after 2014-15) 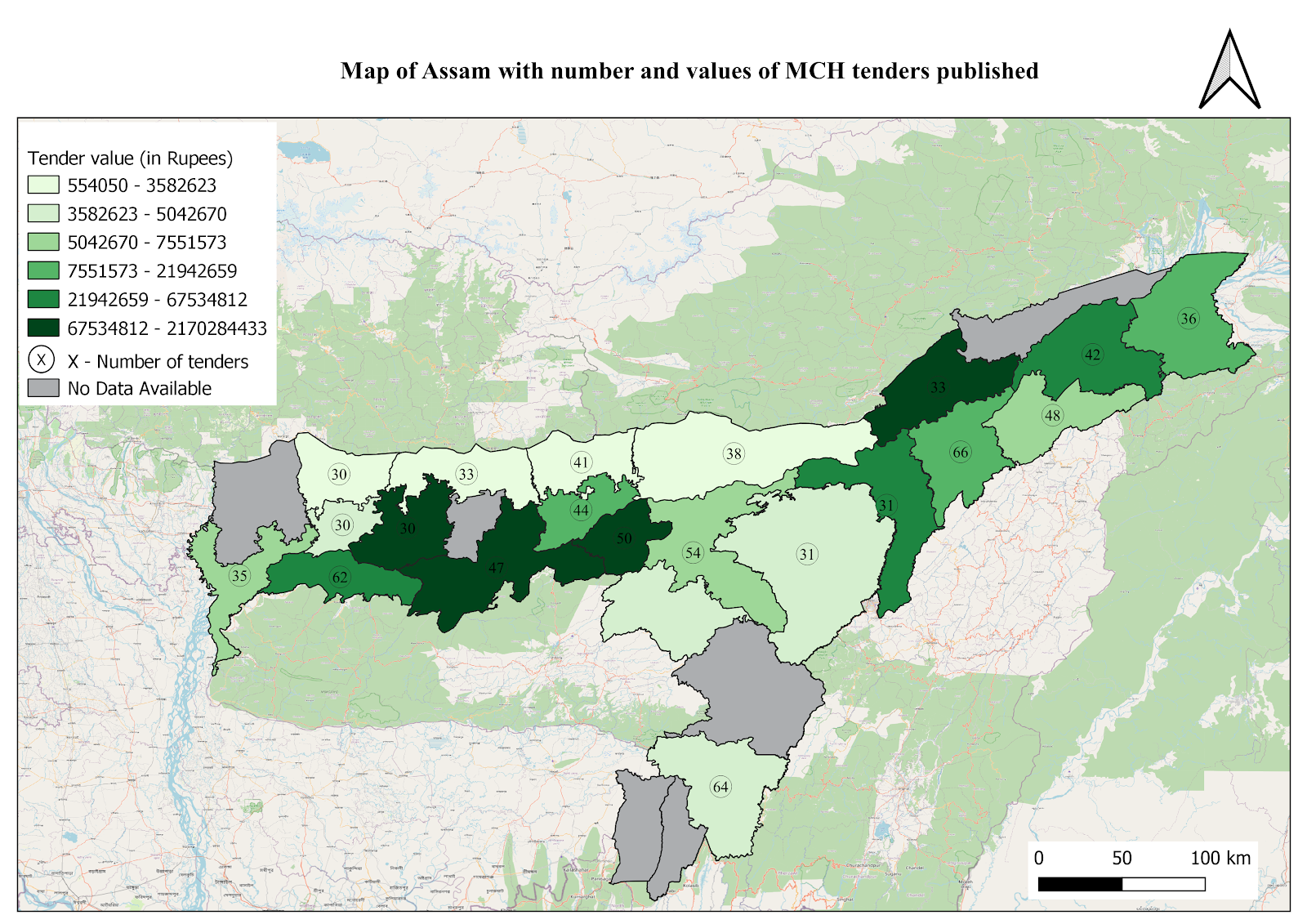 Overlaying this information in Figure 5 below, helps identify areas that suffer from high infant mortality rates and low government support for maternal and child health i.e. from procurement spend. The central Assam region (consisting of Karbi Anglong, Dima Hasao, Cachar), areas within the Barak valley region (Hailakandi), as well as the upper Assam region (Sivasagar) are highlighted as the areas that need most assistance/attention and with the highest mortality rates. While areas in the lower Assam region including Goalpara, Kamrup (Rural and Metropolitan), Nalbari, Barpeta have better health indicators and a larger concentration of maternal and child health tenders being contracted for those areas.

Figure 6: A Composite Map  showing the distribution of the IMR and tender values in Assam. The dark red is the district with high IMR and low tender value while the dark green are districts with low IMR and high tender value.

Similar analyses can be done overlaying composite health quality indices for children with tender information. Or the density of health infrastructure across districts can also be overlaid with the density of health center tenders  to get a deeper understanding of which areas are constantly overlooked for infrastructure. The population density of each district is another variable that could be factored into the analysis, if such data is available.

These types of analyses can be used to identify and re-assign resources and to understand the holes in the governments’ current resource management strategy.

To improve the accuracy of this analysis, and therefore distribute health resources more effectively and efficiently, the researchers propose the following recommendations:

These quick fixes will generate a more useful dataset to analyze and improve the public health of this state and the country.