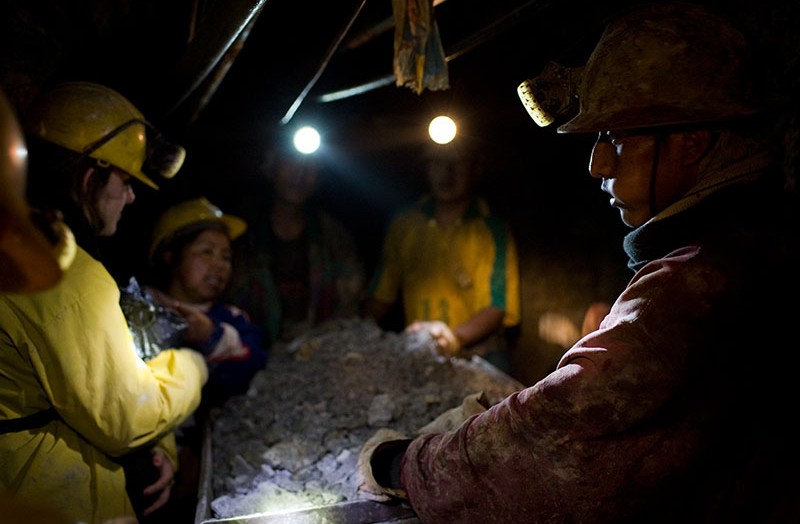 The evidence is mounting: contract transparency in extractive industries is becoming the norm. This was clear during two contract-focused events at the recent EITI conference – an informal learning and sharing side event and an official conference panel event.

Important disclosure gains made for a great backdrop to EITI 2016.  A week before the conference, the government of Colombia put its mining and petroleum contracts online. Then, at the conference Sierra Leone announced the launch of a new online government contract repository, while Senegal indicated that it too would pass a new mining code this year requiring publication of mining contracts. In total, upwards of 27 governments have now committed to contract disclosure. In other news, the global ResourceContracts.org database posted its 1000th document. Between this site and Open Oil’s contracts repository, documents from over 70 countries are now freely available.

That said, conference discussions revealed that knowing how to encourage disclosure and engagement in practical and meaningful ways is something that nobody has mastered. It’s clear that rich and poor countries alike are innovating and learning from each other. This is one of the things that makes this area of work so interesting.

There is no single model or standard with respect to contract transparency. However, it is clear that the host government is key in making the call for publication. Countries may mandate disclosure through legal means, but this is not always necessary: release of contracts can be achieved after simply coming to an agreement with the other stakeholders (as was the case in Mozambique).

EITI also has a crucial role to play. Contract disclosure is encouraged under Section 3.12 of the EITI Standard and many national EITI processes, including Liberia’s, have been at the forefront of collecting contracts, disclosing contents and promoting public engagement. However, an implementation gap between commitments and their delivery is also emerging. Recent analysis of 29 EITI reports from 2014 revealed several EITI countries were failing to live up to their own disclosure laws. As disclosure norms evolve, so too should the EITI Standard to ensure country compliance.

The benefits of contract disclosure are becoming increasingly evident: transparency can lead to increased investment stability, improved revenue collection and enhanced trust between all parties. It can ultimately lead to more balanced and sustainable deals. Many voices echoed these sentiments throughout the conference. For the Philippines, which has established an online database of over 40 oil, gas and mining contracts, disclosures appear to have lessened social tensions and led to better community development deals. More than 450 associated documents have also been published on the country site in order to provide additional contextual information on the contracts.

As governments and companies discussed what they had learnt so far, it became abundantly clear that timely release of contracts is very important. More progressive companies recognized the need “to get out in front” to engage stakeholders and explain their deals and how they balance risks and rewards proactively. This was best illustrated by Statoil, after its offshore gas field development contracts in Tanzania became a very public matter of political contention. Speaking at the conference, Carine Smith Ihenacho, Statoil’s chief compliance officer, said that it would have been better for the company to have pushed for its publication when it was signed. The further away in time that the contract is shared, the harder it is to explain–circumstances have inevitably changed.

Many EITI conference stakeholders also stressed that contract disclosure is simply insufficient: understanding the contracts, disclosing underlying data and making information useful to communities is equally vital, so that citizens can use information to keep governments and companies accountable. At the conference, appeals were also made to expand transparency to include downstream contracts, to improve the enabling process for disclosure and to adopt contract transparency throughout the entire concession allocation process.

Contract transparency is also gaining traction within company circles. A number of companies have championed the cause in recent years, including Tullow Oil and Kosmos Energy. These companies see contract transparency as a means to build trust and establish a level playing field with communities; this gives them a social license to operate. At the EITI conference, representatives from Statoil, Rio Tinto and BHP Billiton added their names to the growing industry community supporting contract transparency in principle. (They did so while noting that government should take a lead in giving permission.)

It was clear from the events that disclosing and sharing contracts containing confidentiality clauses remains a challenge. That said, we heard numerous examples where confidentiality was resolved by mutual agreement or through redacting truly proprietary information. Despite this, there are still concerns that disclosure can comprise commercial competitiveness or scare off investors, although in practice there has been very little evidence of this. At the conference, Milton Rodríguez of PERUPETRO argued that licensing reforms, including open tendering and contract publication, helped the government of Peru improve its overall fiscal take.

Meanwhile, Lance Crist, global head of oil, gas and mining at the IFC, emphasised there have been no real concerns around contract disclosure from investors when the IFC has requested it. It was also quite clear to many participants at our events that key terms from contracts are going to be increasingly available to third parties anyway given the wave of project-by-project disclosure mandated by the EU Transparency and Accounting Directives and the SEC’s likely implementation of Section 1504 of the Dodd-Frank Wall Street Reform Act.

One key piece of advice came from Christian Michelet, an oil and gas legal expert and EITI’s own lawyer: keep it simple. Where possible, countries should adopt and publish model contracts that are vetted by the legislature or legislate key terms to minimize the discretion in contract negotiations and in their monitoring, implementation and administration. But ideally, contracts should only be used to complement the legal framework to either accommodate specific frontier projects or as a temporary measure when the legal framework is not strong and comprehensive enough.

Despite the optimism, a number of challenges lie ahead. It’s clear that a number of major companies– including state owned enterprises–remain resolutely opposed to contract transparency. In addition, as world commodity prices continue to plunge, governments with more marginal assets may resort to direct negotiations rather than competitive bidding. If they do so without transparency safeguards, there is a danger direct negotiations could increase the opportunities for corruption and mismanagement of resources. Additionally, other than the IFC and the EBRD, no other international financial institutions have committed to making project financing conditional on contract disclosure.

One participant wryly flagged the hyperbolic claim from ExxonMobil in its recent SEC filings that contract transparency and/or open contracting demand that contracts “be negotiated in a kind of public-utility framework whereby groups other than the parties themselves would have seats at the table and pass judgment on contract terms.” Of course, open contracting involves nothing of the sort. Rather, it’s about governments sharing and learning from the results of their contracting in an open way and communicating the results to affected stakeholders to build trust and to shape better future deals.

To that end, many participants at our events emphasized that contract disclosure should be at the end of the chain of good practice in concession allocation, covering planning, tender, award and negotiation (as per the Open Contracting Global Principles).

We also heard clear feedback that more needs to be done to unlock the data from contracts (and from EITI more generally) to make disclosed contracts more meaningful and usable. Our organizations plan to scale up our efforts here to extract better summaries of key information and metadata from ResourceContracts.org. Another initiative is a potential extractives extension to the Open Contracting Data Standard, which in turn, could form part of a wider open data schema for the EITI.

In spite of these challenges, the trend is clear: natural resource contracts are increasingly being disclosed and the sky isn’t falling. Rather, there is emerging evidence that contact disclosure improves trust and lays the groundwork for collaboration that benefits governments, companies and communities.

Paulo Cunha is associate director of operations at the Columbia Center on Sustainable Investment, and lead, extractive industries transparency. Gavin Hayman is executive director at the Open Contracting Partnership. Rob Pitman is governance officer at NRGI.

EITI and the emerging global norm of contract transparency

The More the Merrier? How much information on government contracts should be published and who will use it